The first time I visited Mexico I was 17 years old.  That time I was an exchange student to Los Mochis, Sinaloa.  That was a transformative event in my life.  I learned that I could do all kinds of things: speak fluently in another language, understand course lectures in Spanish, dance the way the kids there danced, and handle myself in another family–none of whom spoke English.

The second time I visited Mexico I flew Aeronaves de Mexico’s champagne flight and felt like a celebrity.  I was 18 then and was visiting the most stunning young man I knew.  He lived in CDMX with his well educated Catalan family. That was also a wonderful experience.  Then I visited once again in the 70’s touring about the very hip Zona Rosa and Coyocan seeing Frida’s Blue House before most Americans knew who Frida Kahlo was.

This trip is a very expansive one–six weeks–two in CDMX–Ciudad de Mexico, or DF (deh effe)– Districto Federal– and a month in San Miguel de Allende a colonial silver town in the state of Guanajuato where I’ll be staying at Casita San Miguel owned by my friend– known to some as River Song Jewels–and her husband Luis Romero.  I’ll be attending the writers conference held there annually.  I greatly look forward to this.  All of this!

Mexico City (CDMX)  has a population of about 9 million. Just about the same as that of New York City.  CDMX has the second largest metro system in the world. (New York City’s is the largest.)  It’s a good thing because the traffic is really bad and so is the air quality.  It took me two days to adjust my eyes to the air quality, and my heart and my body to the altitude.  CDMX ‘s altitude is about that of Mt. St. Helens.  I’m accustomed to sea level! 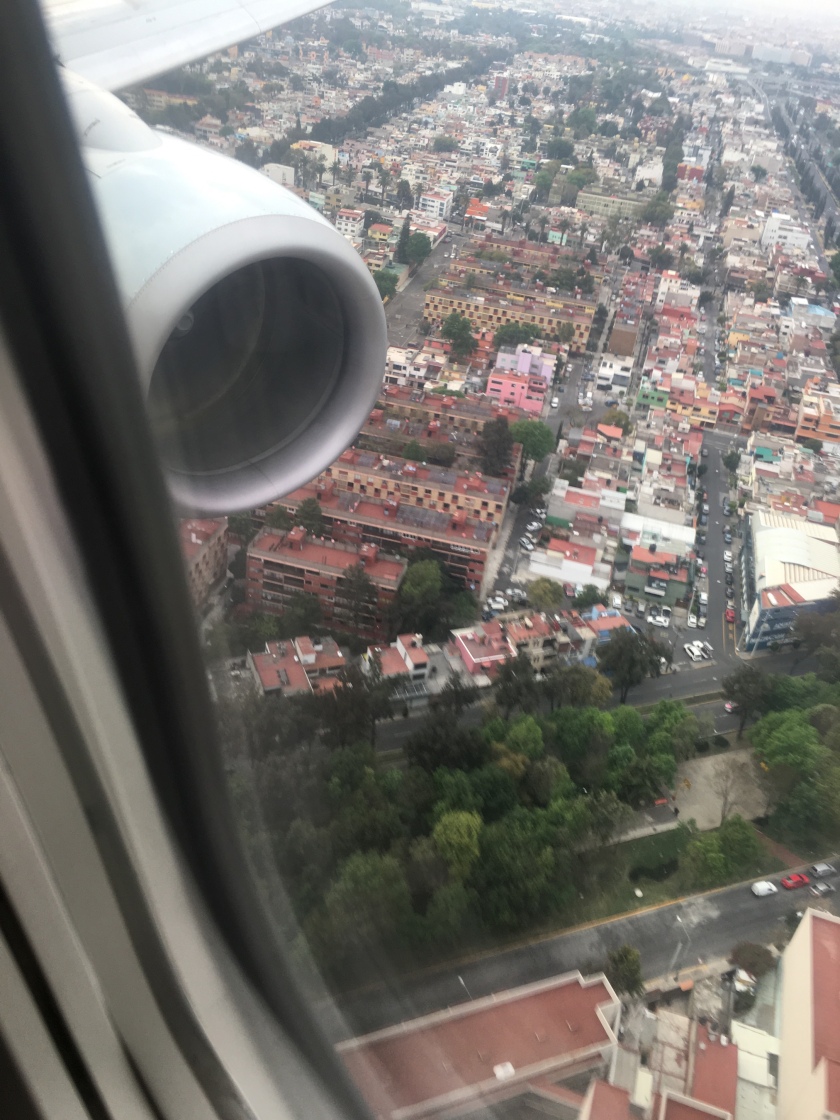 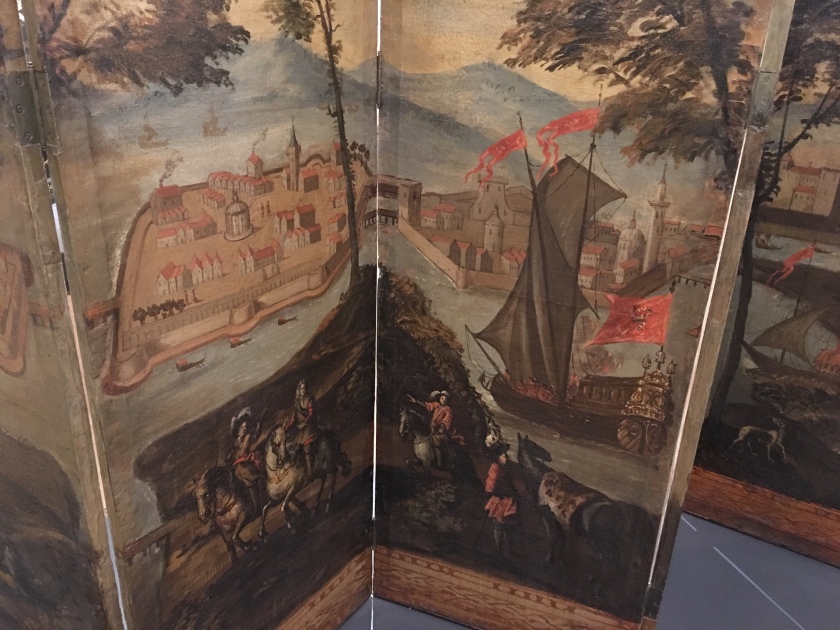 I shot the picture from the airplane just before landing.  The one above is a 16th C folding screen.   This beautiful rendering shows the city as it once was: a group of islands in a river.  Over time the water was drained and the land filled in and the view from the air today shows nary a glimpse of water. 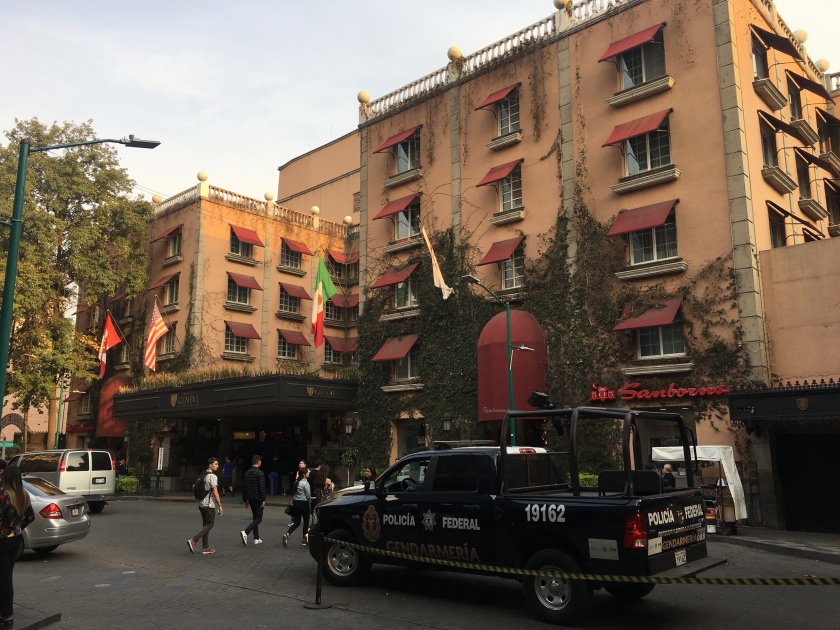 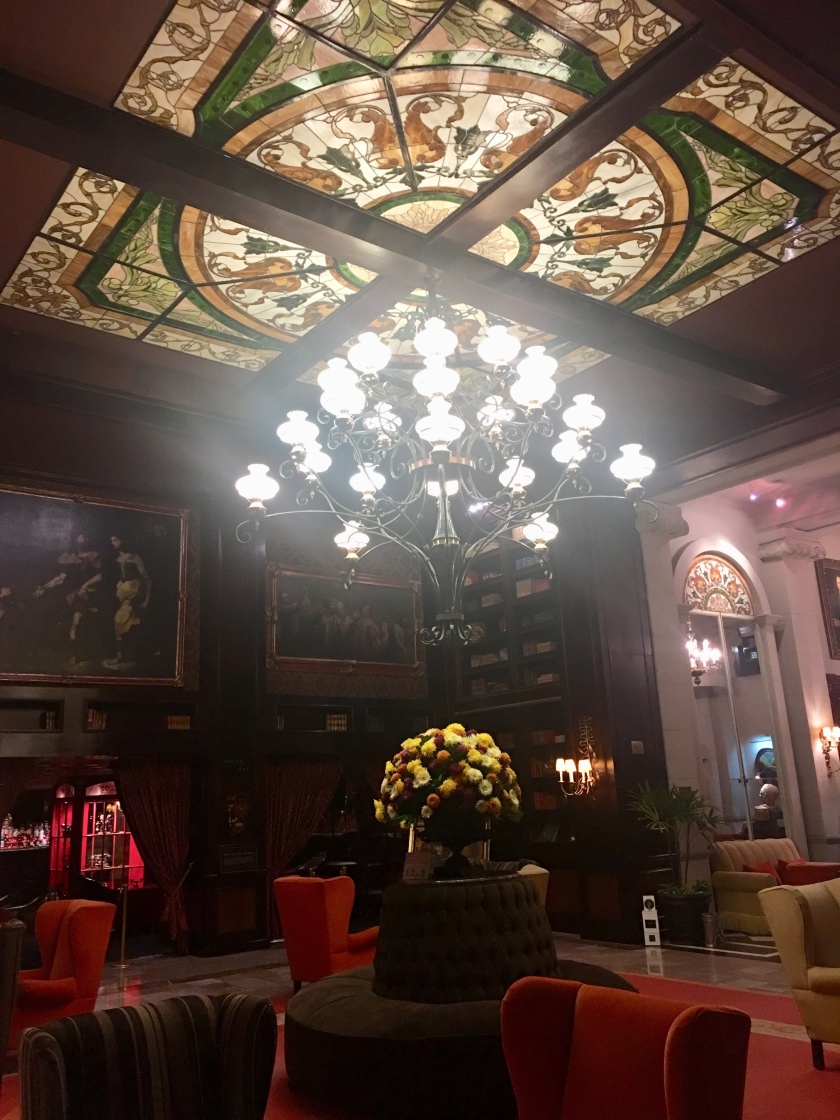 I’m staying in a grand old hotel–not so grand now–in the Zona Rosa which is no longer hip.  The Hotel Geneve opened in 1907. It has wisely retained its glorious lobby and various salons, barber shop, patio, garden room and bar.  The rooms are comfortable but mold is a problem in the bath rooms. There is no AC–the windows open–but the staff is extremely accommodating and strive to please you at every opportunity.  It is listed on the internet as a 5 star hotel–I don’t think it deserves that many stars.  The food is mediocre but inexpensive as are the rooms.  Mine is $77/night.  I am also a short walk from the Metro.

The downside for this location for a single woman is night life in this area.  I still don’t really know my way around either. There is a lot of activity on the street at night and I don’t feel comfortable walking past dives, parlors offering various kinds of services–“happy ending here–” and bars.  It’s fine during the day and on the weekends its full of working class Mexicans and their families just out to shop and stroll and eat out.

There are a few good restaurants, I’m told, nearby but at night take a taxi there and back.  An authorized taxi.  Gypsy cabs abound but they don’t have meters.  If you know your way around and know the going rate for your ride, go ahead but I don’t and I’m sure I was over-charged more than once before I caught on.  Anyone who has traveled in big cities all over the world knows this is not unusual.

Some friends have been a little surprised at my choice to come here. Some have even suggested that my personal safety might be compromised. Sadly the drip, drip, drip of negative talk about Mexicans has had an impact.  I have never had a negative experience with a Mexican—American born or otherwise.  I find Mexicans to be polite, accommodating, friendly, hard working and very generous–often when they have very little to share.  Numerous individuals seated near me in a restaurant when leaving smile and say “buen provecho”  –enjoy your dinner–.   When’s the last time a stranger has said that to you?  They unfailingly wish you a good day whenever you have an interaction be it commercial or just going about your business.  So that’s where I stand.  Just so you know.

7 thoughts on “Deja Vu All Over Again (thanks Yogi)”