This group was a great one.  A German couple; he a Mercedes rep in U.S.,  and his wife who didn’t speak a word of English–he was her translator.  I made a point of engaging her as we all chattered away and she seemed to appreciate being included even if she didn’t understand what we were saying.  Our guide Carlos didn’t speak German either.

There was Maria, and her daughter, Laura from Riverside, California. And our amazing driver, Rodrigo.  Why amazing?  This was a laborious drive ascending a mountain range south of Mexico City with lots of traffic and lots of curves to finesse.  First to Cuernavaca about an hour away and then a two hour drive further south and west and up again to Taxco at 6,000 ft. elevation.  And then a repeat of it all in the dark back to Mexico City dropping each of us off at our respective hotels.

Cuernavaca has been a retreat from the hustle of Mexico City for centuries.  Hernan Cortes had a home in Cuernavaca.  It was constructed out of the ruins of the city pyramid.  I asked Carlos why we weren’t going to see the home of Cortes several times.  He didn’t give me an answer.  In fact he said there was no house of Cortes to see.  Carlos had very strong feelings (negative) about the Spaniards and never failed to point out the work of the indigenous people who of course built the cathedral and chapel we did see.  I get that but the brochure on the trip featured a big picture of the beautiful palace that was the Cortes family home into the 17 C.

Cortes’ former mansion is, ironically, now the Museo Regional Cuauhnahuac (Cuernavaca in Nahautl which means under the trees).  Nahuatl is the indigenous language of the Mexican people and is still spoken by about 2 million of them.  However, that aside, the day involved a lot of driving–we were gone for about 12 hours!–and it would have been too long a day to add in another site I guess.  I was disappointed.

We stayed in the old part of the city and enjoyed the two churches in the town center.  The Catedral de la Asuncion originally founded in 1526. 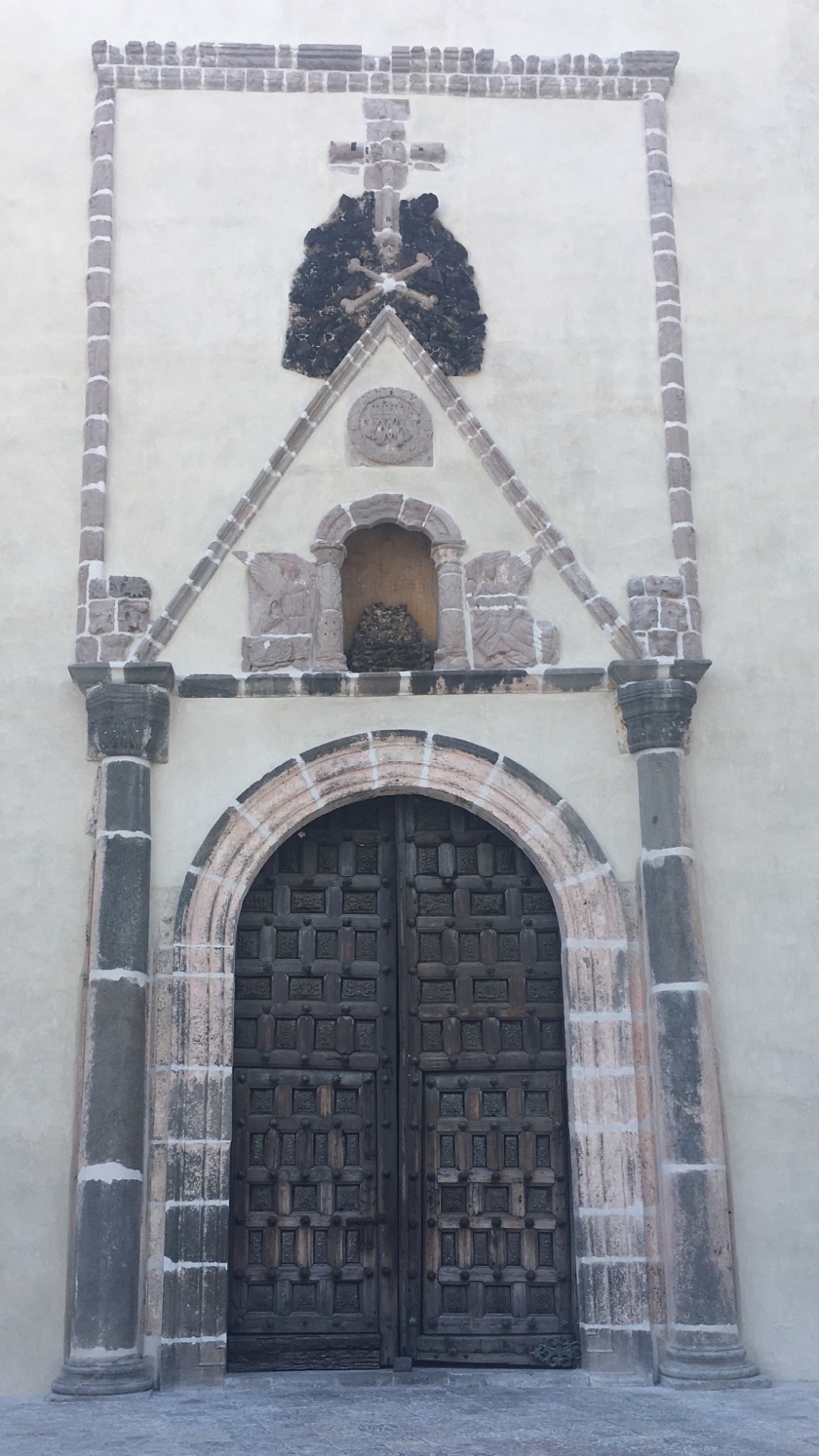 Unfortunately they are engaged in major  restoration and we could only gaze at the exterior. Just across the little park we entered a small chapel Templo del Tercer Orden with a very beautiful gilded alter piece. The figures on the facade are chunky and small.  “Like us,” said Carlos, “none of those thin and beautiful bodies the Greeks and Romans loved!”

We got back in the van and headed further south and west to Taxco, an old and beautiful silver town.  Taxco is famed for its silver jewelry and its lovely Colonial architecture.  Plaza Bordo, the main square, is home to the amazing 18th C Santa Prisca church.  Stone towers flank the entry. The soft rose-colored facade is churrigueresque an elaborate Spanish Baroque style that the friars brought with them to Mexico. 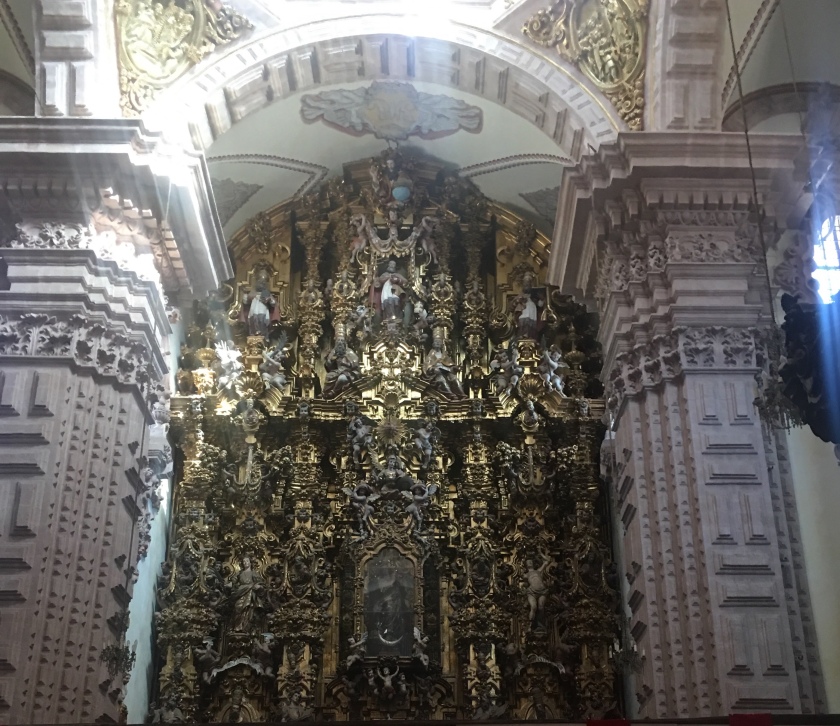 We went to a silver jewelry production shop and were welcomed and invited to attend a short presentation on the history of Taxco and what to look for when buying silver objects.  At the end of the talk we went up to their cafe and had a good and very cheap lunch which was really welcome.  Then we wandered downstairs to the showroom and most of us, me included, bought some jewelry.  I bought a bracelet and a pair of earrings in the style of William Spratling the American born jeweler who greatly influenced Mexican jewelry design in the 20th C.

By now my two new best friends were Maria and Laura.  I had turned my ankle–I was busy gazing around and I missed the sidewalk’s dip to facilitate water run off.  It was a momentary slip but there are nothing but cobbled streets–nothing flat or smooth to walk on–and I wasn’t as steady on my feet as I’d like.

Maria, born in Mexico City, has lived in the states for 40 years and raised her family there.  Laura her only daughter and she were having a wonderful time.  They rattled on in Spanish behind me in the van, laughing and giggling all the way.  Maria and I linked arms and she helped steady me.  They were both so much fun and very nice.  There was something so sweet about walking along with her; her kindness and thoughtfulness were very welcome. 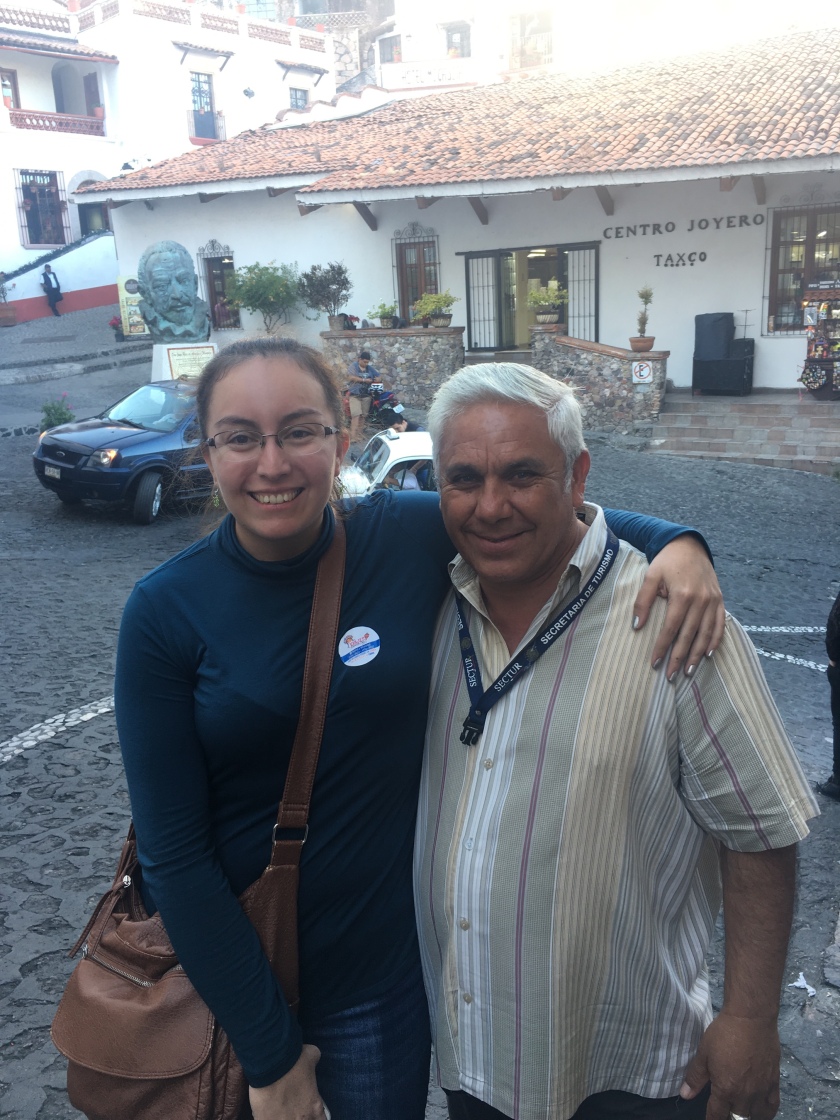 Laura and a native Taxcan.

Taxco is surrounded by mountains.  White houses spread across slopes and valleys creating a very picturesque vista.  It’s a very beautiful town.  We reluctantly boarded the van heading back to Mexico City–about a 200 mile return in the dark.

4 thoughts on “Cuernavaca and Taxco”