I spent most of last week in bed.  No, not that, sadly, in bed with a bug.  I did something very foolish.  I had the touted quesadillas of one of our neighbors.  She sets up a table on Friday afternoons and makes delicious quesadillas which she sells for 15P.  Normally, I would never do something so foolish, but my host raved about them and has had them numerous times and is of course inoculated against local bugs.  He lives here.  So I took my plate home and ate them.  They were very good. 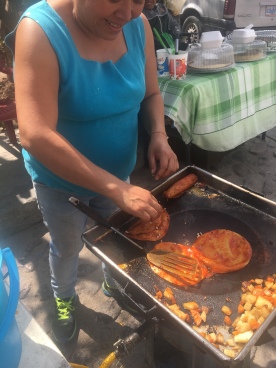 Later that afternoon I walked to The Rosewood to spend the glorious hour before the sun sets ensconced on a banquet at their chic rooftop bar with an unobstructed view of The Parroquia.  I ordered a mezcal cocktail (when in Rome etc.) and some guacamole and chips.  All delish as was my server, Jose Antonio.  Seriously, he was able to converse intelligently about Sapiens–a book that has daunted many who have opened its covers–I am one of those people–though I plan to give it a go again when I get home.  He has been at The Rosewood since it opened eight years ago. 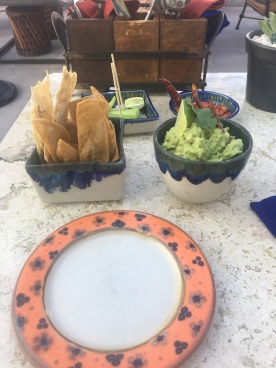 Then I took a taxi home.  The driver, Paco, a personable, attractive guy who had written across the top of his windshield in beautiful script “Nunca te olvido.  Te amo siempre.”

“She found another.” he said sadly.

I got out and walked home.

I wasn’t especially hungry at that point, but I made myself a bowl of rice and called it  day.

Hours later, I awakened to a ferocious head ache, chills, sweats, and gasping discomfort. I made a mad dash to the bath room, not quite making it. I lost everything I’d eaten for the past hundred years.  Right there!  Boom!

The next morning I awakened groggy and unable to move.  I was being prodded.  I did get up and looked into my little purse and, as my subconscious suspected, no wallet.  I had the change from the taxi driver when I paid him, but no wallet.  I realized it had fallen out in the taxi probably as I was getting out of the car.

Darling Luis, came in to check on me and I told him.  Both of us were ashen.  Again, stupidity prevails, that wallet contained my credit cards and about 3,000 P.  Thank God, my passport was safely at home.

I called my bank.  There is very little they can do but cancel the cards and, I was about to authorize them to do so, when Luis came to the door, face beaming, he had called The Rosewood, the taxi driver had turned the wallet in to their Concierge.  There was no cash or change in the wallet, but all the cards were there.  Later that day Luis and River ran to The Rosewood, picked up my wallet and left a big tip for the driver.

Have I vowed to mend my foolish ways?  Will I wear the little pouch Rick Steves sells under my shirts?  (Yes, I have one.) Probably.

I said a prayer of thanks, and went to sleep.  I pretty much slept for the next three days missing days one and two of the Writers Conference (more on that to come).  I dragged myself to the Conference the third day and all the other days feeling better each day but no appetite or energy in sight.  I’m sure both will come back!

“Mejorando,” as they say.